I finished another piece from my jewellery course. This time it was a pendant. The goal was to learn how to make tubes and then use them in a design.

I opted for a triangular pendant with small flowers and waves. The flowers also have a triangular shape to follow the theme. Even though the composition is asymmetrical, I tried to balance the elements in the design.
The tubes are used in two situations: As decorative “dots” between the wavy lines and also as a bail for the leather cord to slide through. 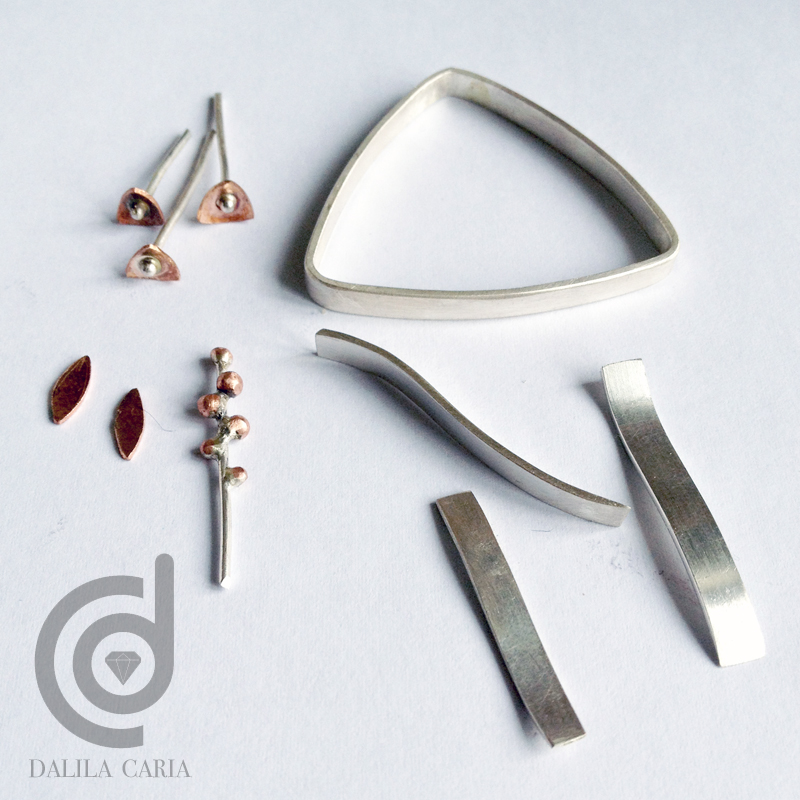 I chose to make part of the flowers in copper to add some color, since I wouldn’t use a gemstone. I could have used gold, which would add monetary value to the pendant but I happen to like the tone of copper. It was a personal preference. 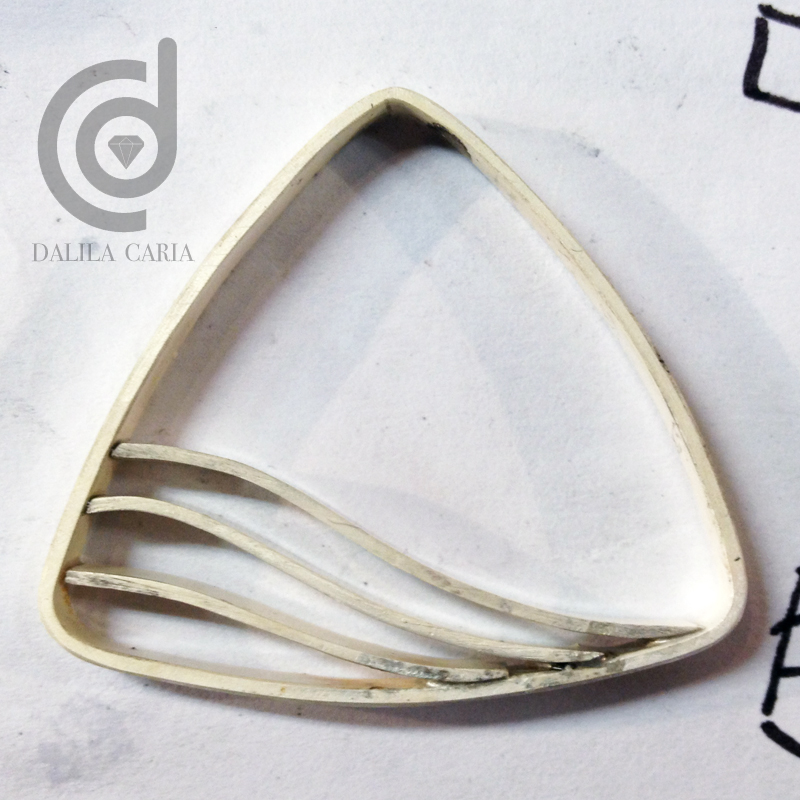 To make the frame I used the ingot I had made in class. I flattened it in the rolling mill until I had a sheet measuring 370×1 mm.
I formed the triangle but chose to keep rounded corners.

After sawing out all the parts I began to shape and assemble the flowers. Instead of soldering wire to the base of each flower, which would make them fragile, I balled up the end of the wires, drilled a hole into the copper triangles and inserted the stems, with the ball on top, as the center of the flowers. One of the flowers was different. I made it by soldering small copper balls around the silver stem, like small unopened buds. After soldering all the pieces together I made the tubes. It’s a fairly easy process if you have the right tools. I still don’t have a swage block to shape the inicial half cylinders, so I can only do it in class.

To make a tube I started with a fairly thin strip – 3,5mm thick – and cut a triangular tip on one end. I placed this strip into the largest hole on the swage block with a doming punch on top of it and hammered it down until it conformed to the curve of the swage block. I kept moving to smaller and smaller grooves until the strip formed a half cylinder.

At this point I annealed and covered the metal with wax (for lubrication) before proceeding to pull it through a large hole on the drawplate with pliers, and then through smaller holes until the cylinder was closed.

From then on, if you keep moving through smaller holes you reduce the size of the tube and also compress the metal, so the thickness of the tube walls will increase. 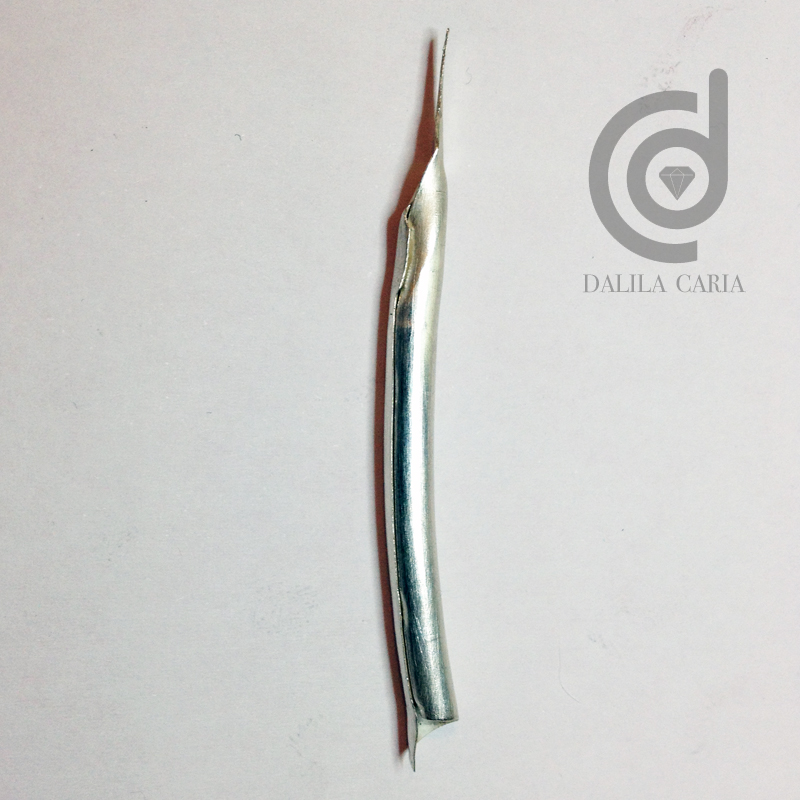 To make a cylinder the size you want without increasing the thickness of the walls you should use math – diameter (inner or outer, your choice) minus thickness of the metal (only necessary for thick plates, otherwise you can skip this step) x3,14 (Pi) gives you the length to cut.

If you don’t have a drawplate with large enough holes, you can just shape the cylinder by hammering the metal around a mandrel, like a doming punch, until it’s closed. This has a greater risk of marring the metal but it can be done.

The tubes were soldered closed and the large one was curved over a bracelet mandrel to form a subtle curve. I used just my hands to curve it because I didn’t want to risk leaving tool marks or deforming it. To solder the bail tube to the pendant I first filled the top of the triangle flat to give it a larger contact area and then placed the elements over plasticine to make sure everything was precisely where it should be. I covered everything in plaster except for the area I wanted to solder. Stabilising in plaster is the best way to prevent elements from moving out of place when you solder. The downside is that it sucks up a lot of heat so it takes longer to get the solder to flow. The trick is to heat the plaster before the metal. Once it starts to look burnt you can focus the heat on the metal. 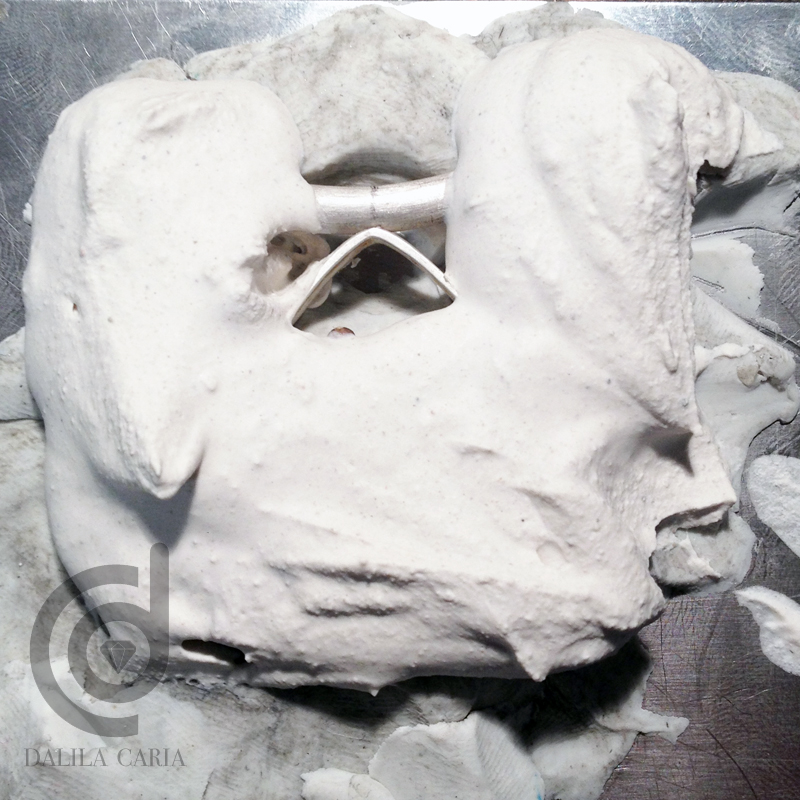 The tube was also used for the leather cord end caps. I soldered a small jump ring at the end of each tube to connect them to the clasp. The clasp has an S shape that is very secure. One of the ends is soldered shut and only the other end is open. In one of the decorative tubes, between the wavy lines, I soldered a prong do I could add a small pearl. To center the prong in the tube I balled up the end until it was a tight fit inside the tube and then soldered it. The prong was cut to size and the pearl was glued in place after polishing.

The inside areas were textured with a diamond burr. The outside was polished with felt and greed polishing compound and then buffed with a cotton puff and red rouge. I inserted the leather cord into the pendant before gluing on the end caps. I used Araldite crystal glue, which is basically a fast drying form of epoxy resin. Mohs Scale – hardness scale for minerals, metals and other materials