The collar necklace project had two goals. To form a collar in a way that fit comfortably around the curves of the neck and shoulders, and to learn how to make a claw setting for a stone.

While the bezel setting is used mainly for cabochons and other stones with a flat back, a claw setting is mainly used for faceted stones with a pointy back (called the pavilion). The open back and less metal around the stone allows it to shine. 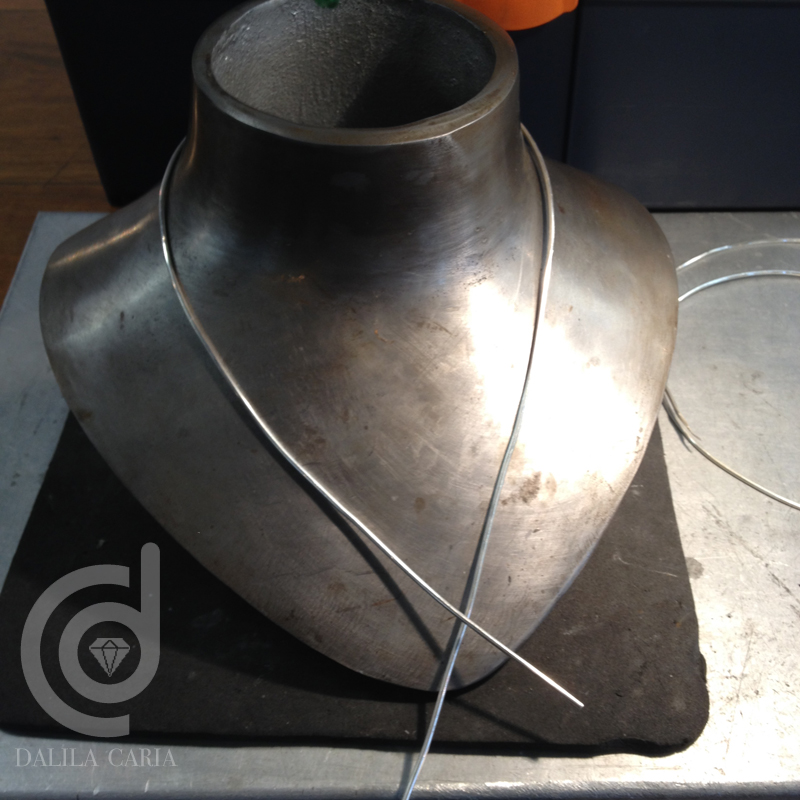 I made the base wire of the collar out of 2mm round wire that I ran through the rolling mill to flatten it into rectangular wire measuring 2,30×1,70mm.

I shaped this wire around an iron bust until it followed the contour of the neck. The main details in this process are:

1. The wire is shaped standing up, meaning standing on the thinner edge of the wire. The larger edge is in contact with the side of the neck, making it more comfortable to wear.

2. Aside from shaping the collar around the neck, it must also be shaped downward in order to adjust it to the natural curve of the shoulders. When placed on a table, only the back and the front of the collar should come in contact with the table. The sides must be lifted.

When the base wire if properly formed, it’s time to add any decorative elements. Some colleagues made leaves, flowers, grapes and other elements. I chose wire swirls and yellow and blue topaz stones. I wanted to make a decorative piece but nothing too heavy. I didn’t want it to be so fancy that I’d need a special occasion to wear it. 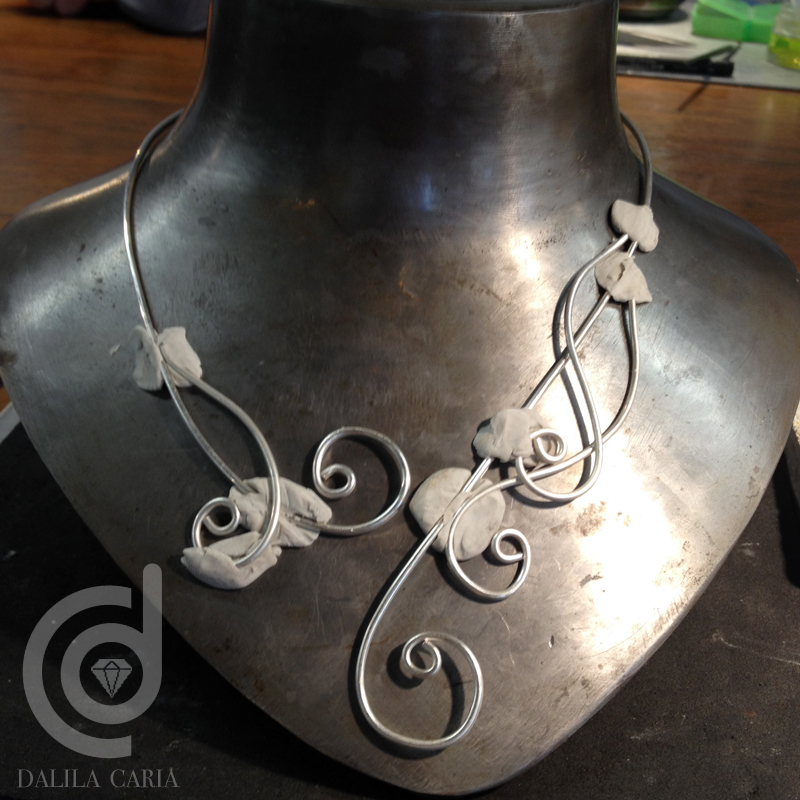 I made the swirls out of 1,5mm wire and hammered the ends to flare out the curves a bit. The variation in wire thickness adds interest and the hammering also allows the curve to “set”, making it harder to pull out of shape. 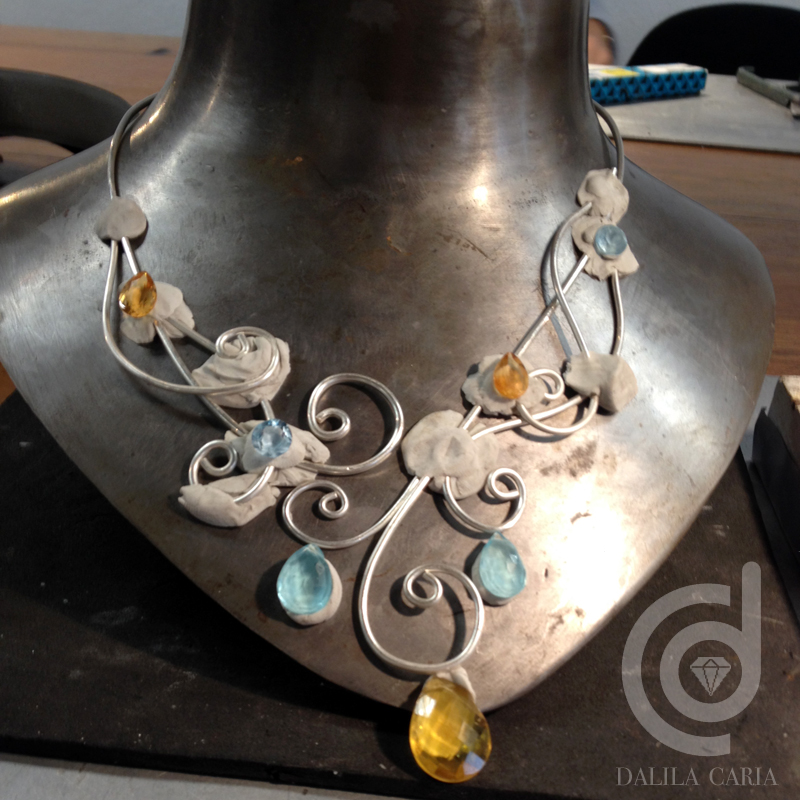 All the elements were assembled on top of the iron bust, using plasticine to attach everything temporarily until the layout was how I wanted it. Even though I had made an sketch, some changes are always required when going from two to three dimensions. 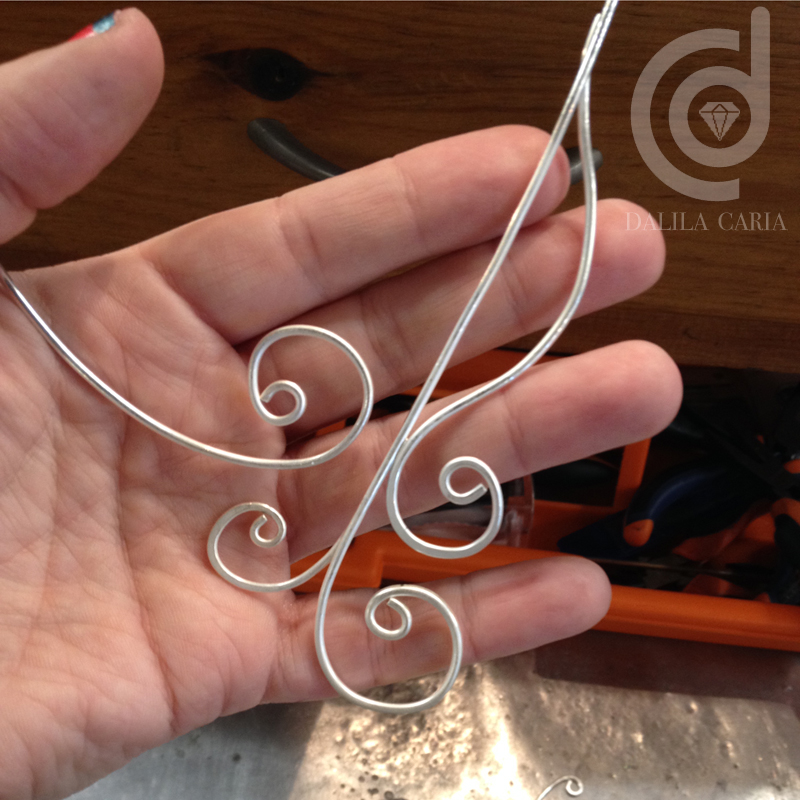 Once the layout was done and all the parts were shaped and filled in order to fit together, I began soldering one or two elements at a time. Since it’s a large piece, a large flame was required and I had to make charcoal walls around the areas I wanted to solder, to concentrate the heat as much as possible. When you crank up the heat it’s easy for wire ends, such as my swirls, to overheat and melt but fortunately I was able to prevent that by keeping the flame moving, using white correction fluid on the wire tips and even covering some parts with charcoal to prevent direct heat.

Once the swirls were soldered in place I could have stopped there but I always like adding color to my jewellery through the use of gemstones. It was time to get started on the claw settings.

I used 2mm wire once again. Ran in through the rolling mill until it was flattened to a thickness of 0,6mm (22g). The height of this strip was just a bit shorter than the height of the pavilion. In this case, the pavilion measured 4 mm and the silver strip measured 2,20mm in height, which was enough.

Making the seat for a faceted stone is not as easy as making a bezel. To make a bezel, all it takes is to wrap the bezel wire around the stone , mark where it overlaps, and cut. For a seat you still need to follow the shape of the stone but the size needs to be a little smaller than the stone so that no metal can be seen when you look from above. Basically the diameter of the stone should be the same size as the outside diameter of the seat. That is easy enough for round stones but for other shapes it can get a little trick to get the measurements just right. Digital callipers are a great help when comparing the size of the stone and the seat. 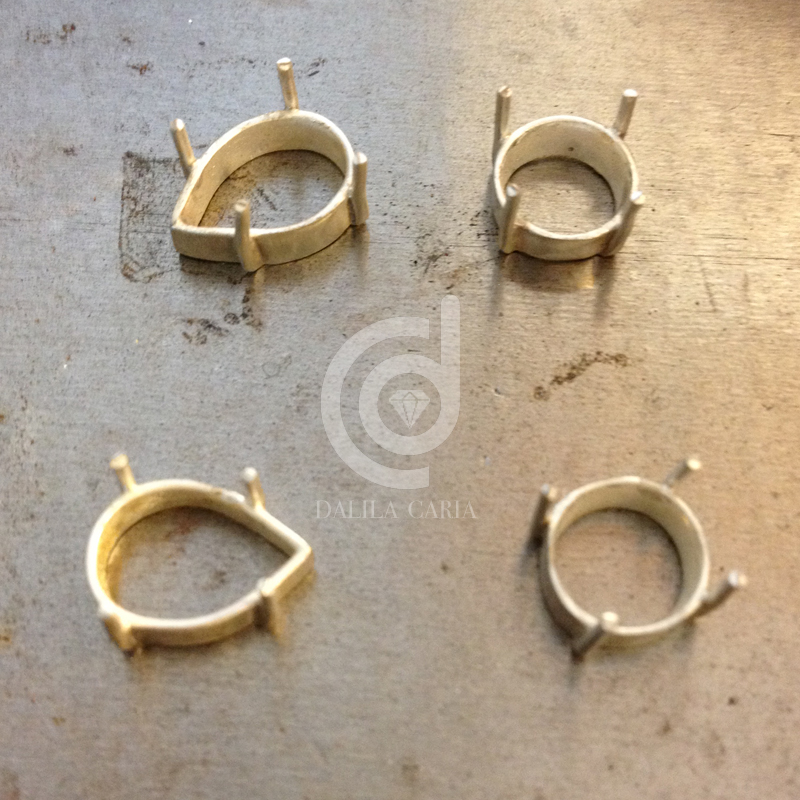 I made two different setting shapes – round and pear cut – and also made a square one at home, for a ring. While I was in learning mode I wanted to try different variations for the same technique in case I had any doubts. I have to say that for square stones, 8 claws are better than 4.

The claws were made from 0,8mm wire (20g). I used two different techniques to attach them to the base: 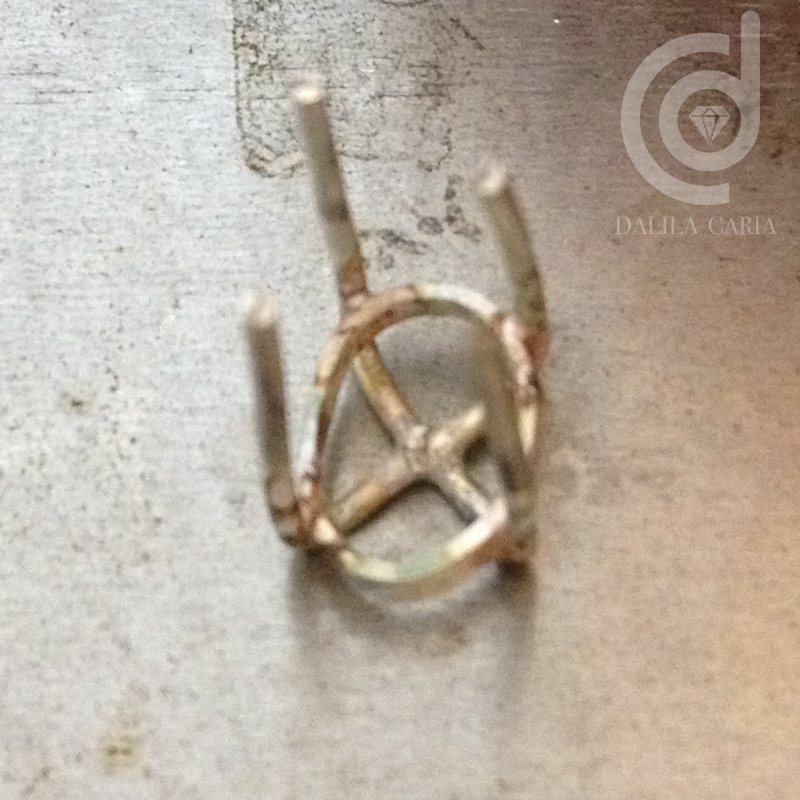 1. Solder a wire cross. Solder the stone seat on top of the cross, making sure it’s centred. Fold the claws up, along the outer walls of the seat and solder them.

2. Make an inverted U shape that fits snuggly over the seat and solder the claws two at a time.

I liked the second version better. It was easier to control the placement of the claws. I held the U in place with third-hand tweezers while soldering.

I soldered the settings to the collar. Heat control is very important to prevent the claws from melting. I covered as much as I could with correction fluid and pointed the flame away from the settings as much as possible until the rest of the metal was up to the right temperature. Easier said than done on a large piece.

Before setting the stones I prepared the claws. A notch has to be cut on the inside of each claw so they will bend easily over the stone without putting too much stress on it, to prevent chipping the edges. The claws were also cut to size, leaving only 1mm above the girdle. It’s enough to grab the stone without covering too much of the crown.

I used a jeweller’s saw an triangular needle file to remove some of the metal from the inside of the claws, leaving the top 1mm intact. I placed the stones inside the settings and folded each claw over the stone with the help of pliers, without putting too much pressure on it. Even sturdy stones can chip if we’re not careful. A pusher can also be used to bend the claws but I didn’t have one at the time.

One of the claws wouldn’t bend properly, which was a good thing because it allowed me to learn a new technique. I inserted the saw between the claw and the stone and removed the extra metal that was still in the way. After this step the claw folded perfectly into place.

This trick should only be used on hard stones that can’t be damaged by the saw like diamond, topaz, quartz… On these stones a saw or file is safe. Sandpaper, on the other hand, should be kept away because it will scratch. This is why the tips of the claws should be rounded with a file and not sandpaper (at least unless you’re extremely experienced). 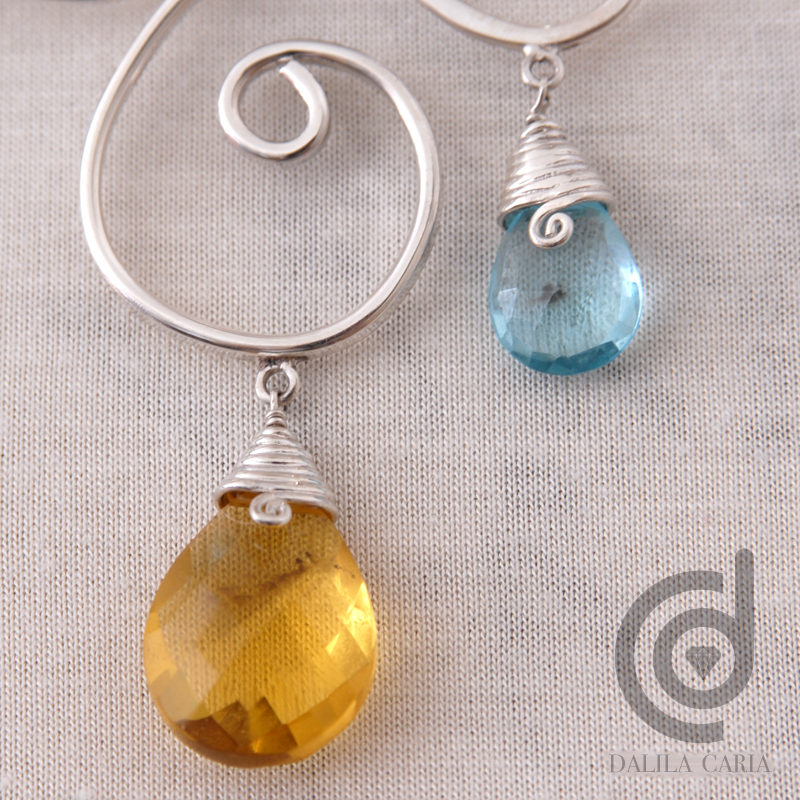 I was also going to hang some gemstones drops so I made soldered wire cones to cover the wire going through the drops.

I finished the collar by polishing the metal. I used felt with green polishing compound for most of the wire and then a soft hair wheel for the detail and finally a cotton puff wheel with rouge for shine.

In some really tight areas I hand polished by running cotton string covered in polishing compound back and forth along the tiny holes that I couldn’t reach with anything else. 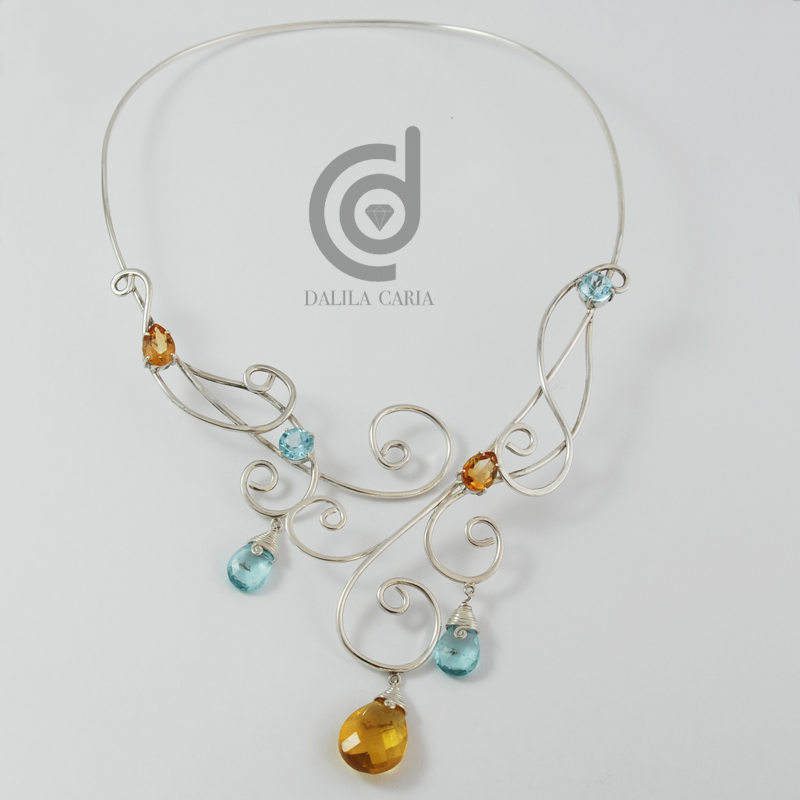 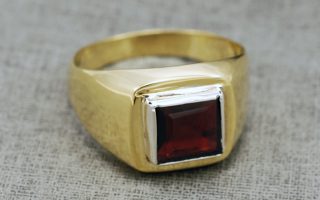 Adding a faceted gemstone to a ring 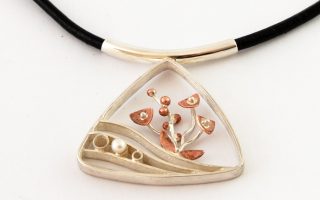 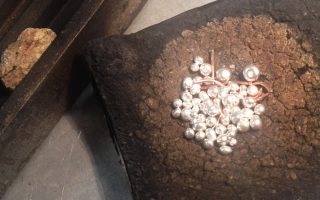 Start of the professional jewellery course