The next exercise in the advanced jewellery course was to make a brooch with a pierced wall.

The wall adds height to a piece, lifts it away from the body and transforms a thin sheet of metal into a tridimensional item. A pierced wall simply means that there are openings all around the piece that allow light to shine through. In the chosen design, the wall is also the base for the stone setting. 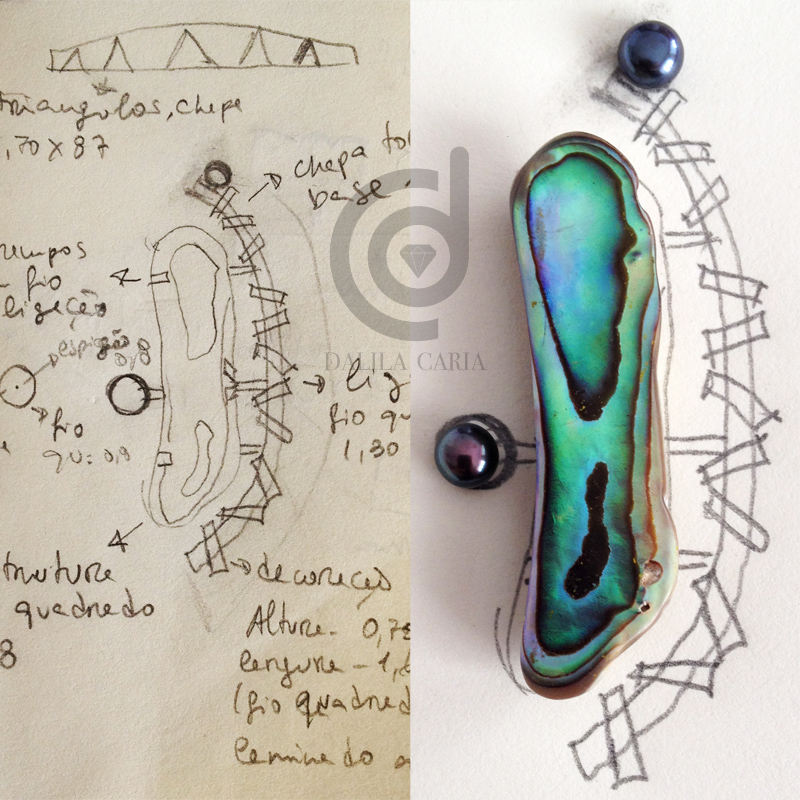 I chose an abalone fragment. It’s a shell similar to mother of pearl but with very bright, beautiful colours. This abalone fragment was given to me by my aunt Elisabete and I felt it deserved to belong to a special piece. I also chose it because I have a tendency for geometric designs and I wanted to see what I could do with a more irregular item. Each has good and bad things. It’s easier to make a setting for a regular gemstone, for instance, but a lot harder to be perfect when cutting out a geometric design.

This particular design was inspired by a Stacy Perry piece (hodgepodgery) but I believe the end result is quite different, thanks to the dimension added by the pierced wall.

The abalone fragment had a very irregular base and one side was much higher than the other. The taller side was too tall to fit well, so I filed it down until there was enough flat base for it to sit straight and steady. 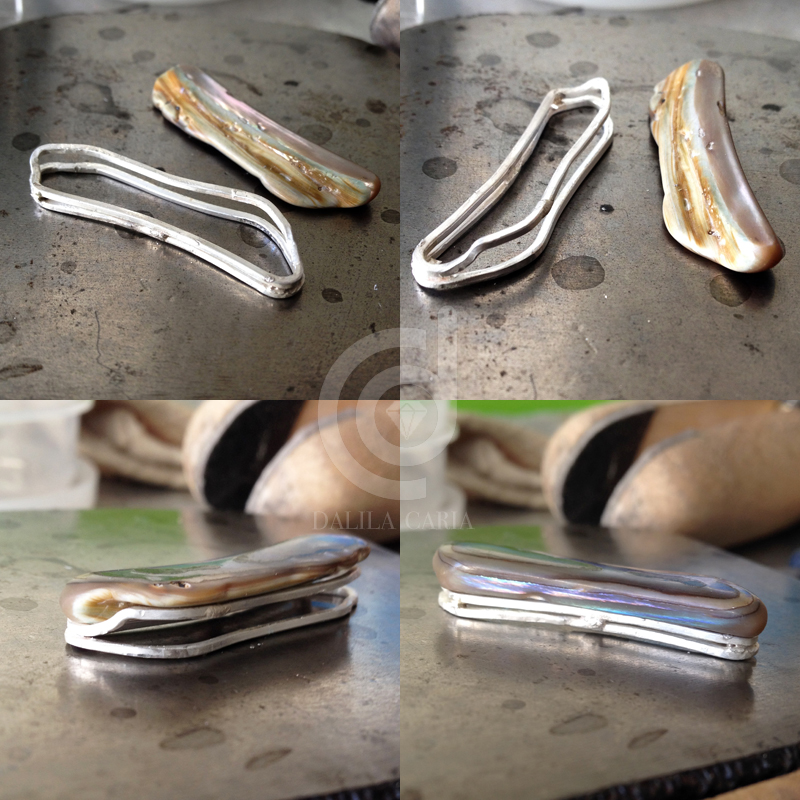 I started with the setting, by shaping a 1mm square wire until it fit the underside of the abalone fragment. The wire also followed all the ups and downs of the base. With another square wire I duplicated the shape but this time made it flat. The pierced wall would be assembled between these two wires.

On the side where the abalone was highest, both base wires nearly touch. I simply added some rectangular wires at regular intervals, like pillars, between both square base wires to create some height and let some light in. This is the simplest way to make a pierced wall. With a regular gemstone it’s possible to do this all around. The look of the wall can be changed simply by changing the height of the pillars. 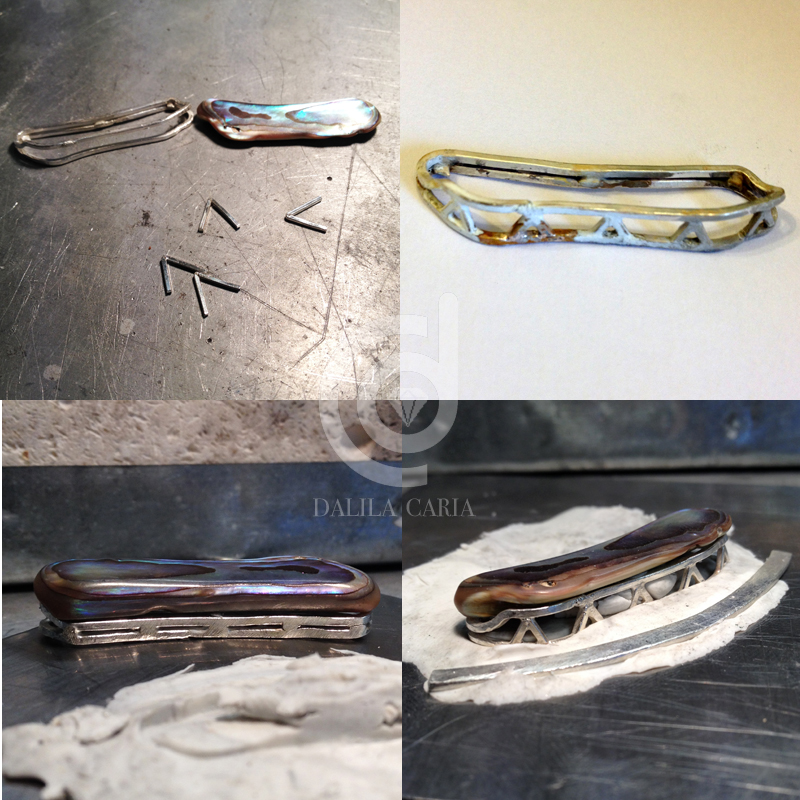 The opening on the opposite side was quite large so simple pillars would be too bland. Since the project included some triangular decorations, I decided to also fill the wall with triangles. I used 0,8mm (20 AWG) square wire, cut it into small bits, cut a small notch in the middle of each one and bent them in half to make two sides of the triangles. I filed the ends until they fit perfectly between both base wires and soldered them one by one.

After that I made the second element in the design, a sort of curved bridge that would sit next to the stone. I used rectangular wire 1 mm (18 AWG) thick by 25 mm wide, shaped in a soft curve. There were two similar curved shapes (top and bottom) with more triangles in between. 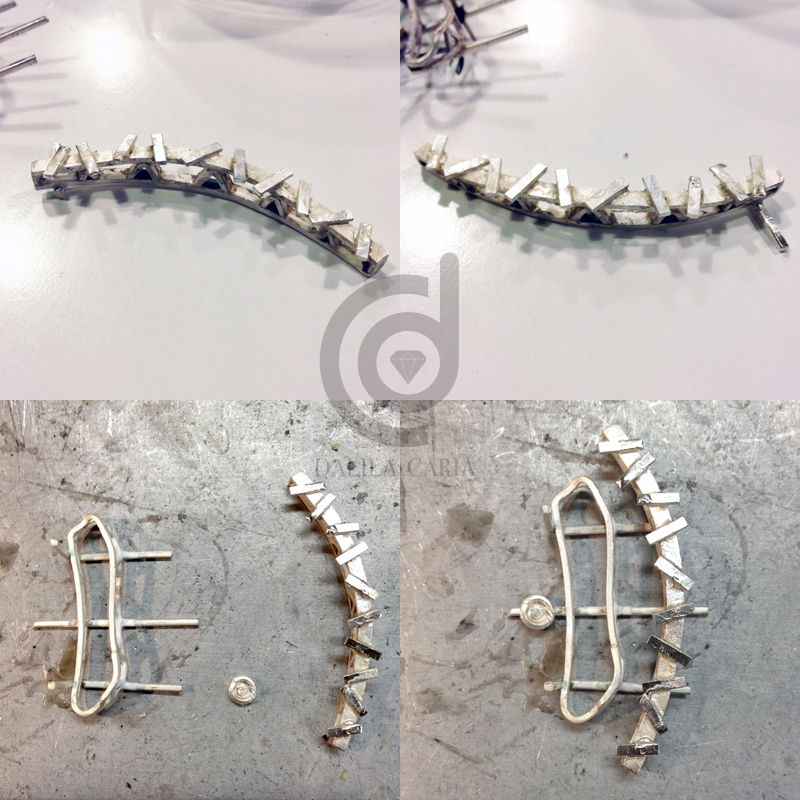 On top of this “bridge” I soldered small rectangular wires also following the triangular motif. These were purely decorative, to add texture. Underneath the “bridge” I soldered three parallel square wires that would connect it with the stone setting. One of these wires stretches beyond the setting to support a small pearl and the other two became prongs that hold the abalone shell in place. The pearl setting is made from a small bezel with a prong in the middle. The pearl was glued to the prong with epoxy glue. 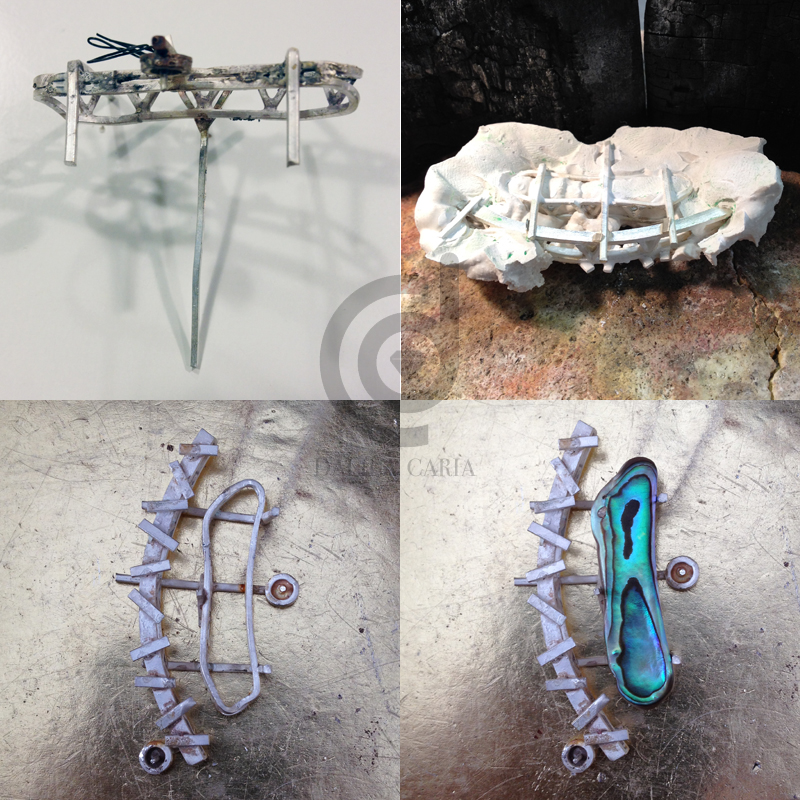 I soldered another triangle on the inside of the stone setting to add an extra prong and also bent and soldered the two other prongs to the side of the setting. I used plaster to hold all the elements in place while soldering. 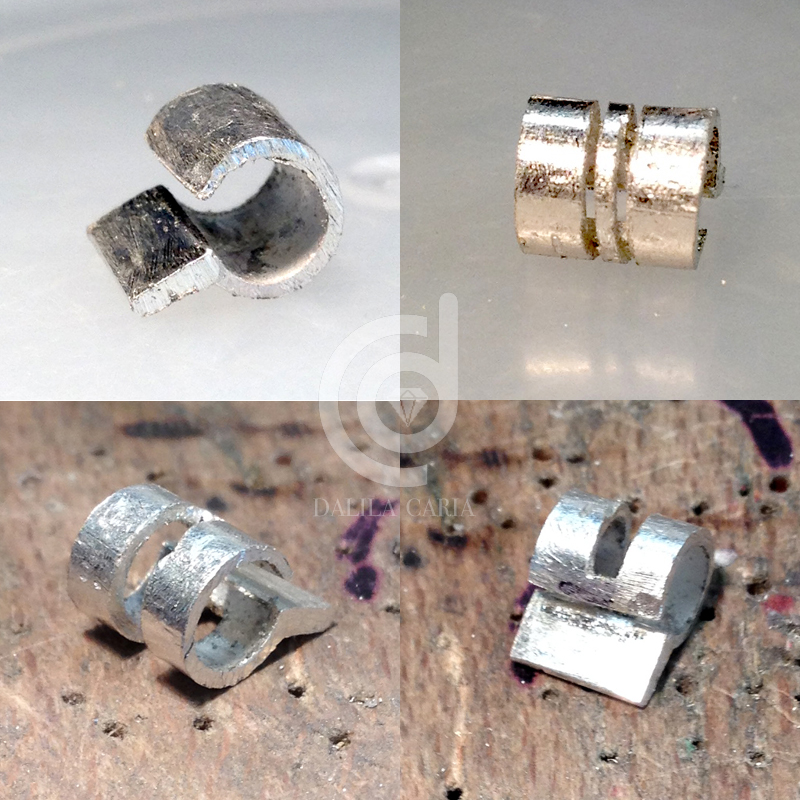 Once the main design elements were done, I worked on the pin mechanism. This time I did a rotating catch.

I made a tube, cut a small section, soldered a small piece of rectangular wire to the side of the tube, to make a base, and cut a strip off the opposite side (the top), This strip will accommodate the slider that allows for the catch to open and close.

I ran the remaining tube through a draw plate to make it small enough to fit the previous tube and soldered a bit of square wire to it, to make the slider. I inserted this tube with the slider, into the larger one (I had to open up the larger tube to make this one fit) and then soldered a small square on the tip of the slider. I drilled a hole in the center of the square so it would fit onto the wire and be more secure. Since the slider was made from square wire, I had to file this hole square as well. It took forever to make it perfect. I think round wire for the slider is a much simpler option in future. Once everything was in place, I sawed off all the excess tube, which I had cut a bit larger than necessary. I always refer to start larger and then cut it down to size. More room for error. 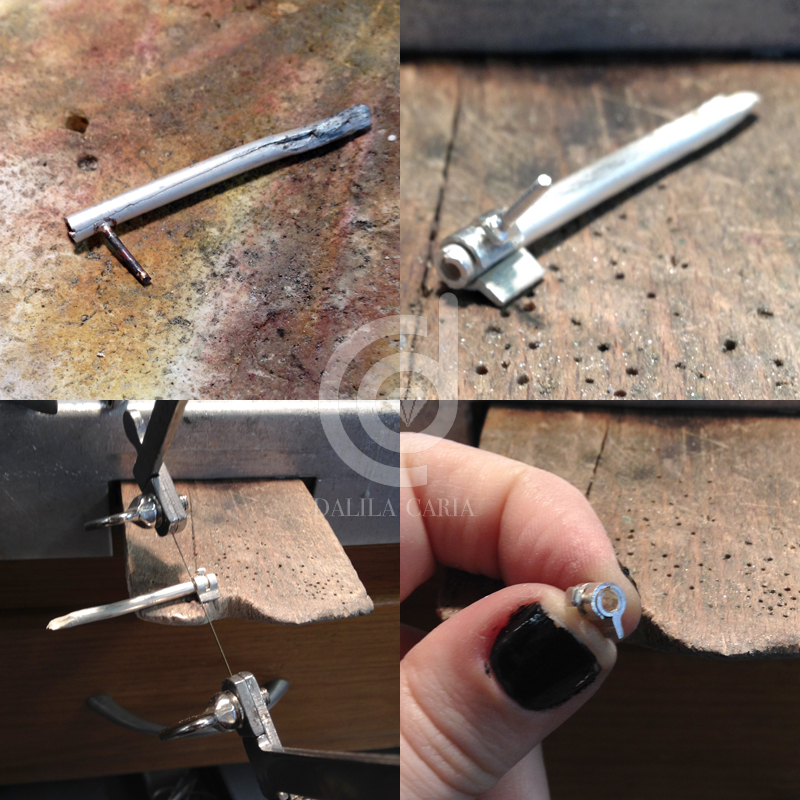 The pin stem and the joint were made the same way as the previous brooch. I added a little loop on the back so the brooch could also be worn as a pendant.

Once everything was soldered in place it was time to file, sand, add patina and polish. I only wanted to add patina to certain areas of the brooch so I heat it up for a few seconds and painted the liver of sulfur onto the bits I wanted to darken with a small paintbrush. It saves time when polishing if you don’t need to remove so much of the patina in unwanted areas. 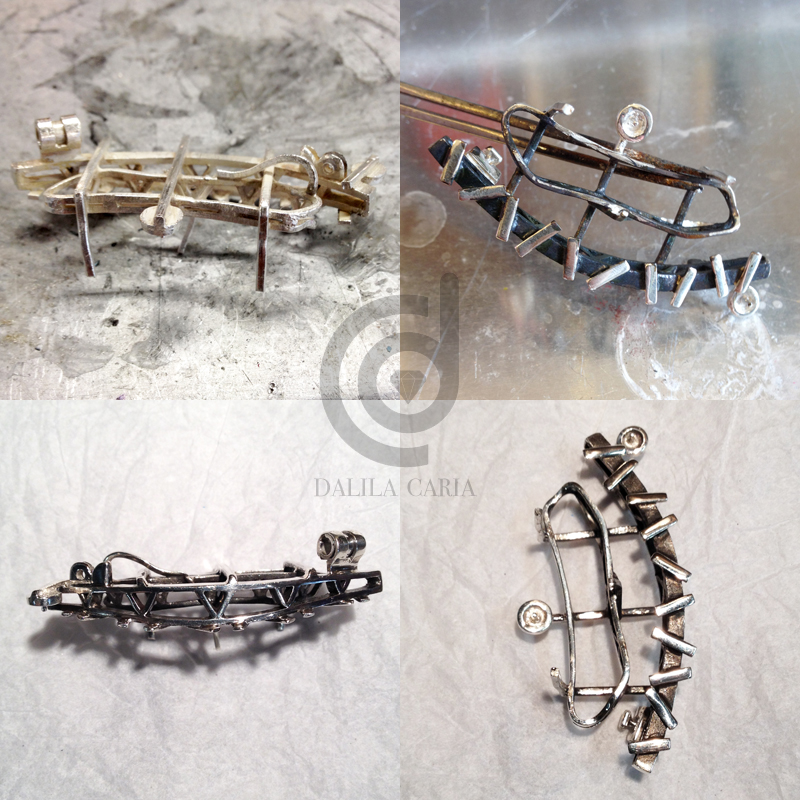 Finally I set the main stone – the abalone fragment – and glued the pearls onto their spikes. I also attached the pin stem with a rivet and I was done. This piece took a long time to complete because there were a lot of small elements that had to fit just right. 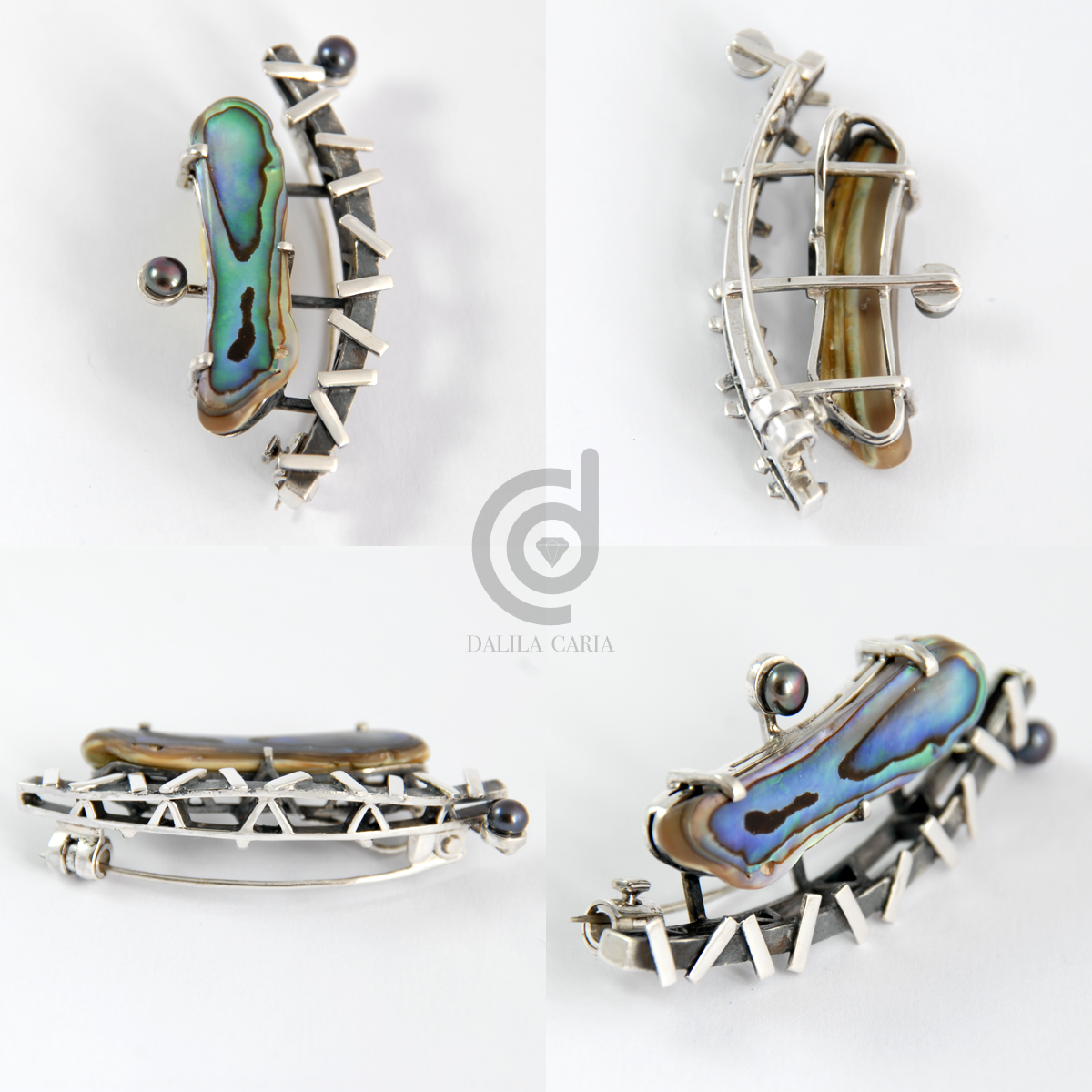 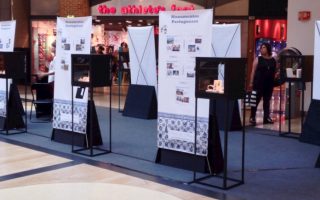 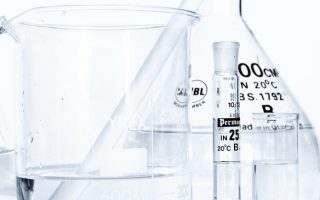 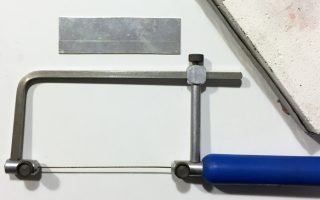