The project for these earrings included two learning exercises: the 8 prong stone setting and the leverback closure.

As always, I started by picking out the gemstones. I had bought a couple of identical topaz stones at the last mineral fair, and its square shape was perfect for the 8 prong setting. 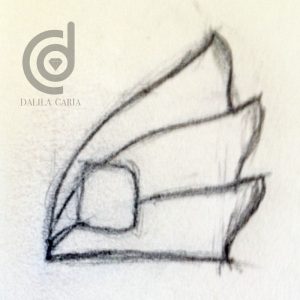 After several sketches, I came up with the overall design.

I started by making the support for the stone from 0,9 mm round wire (19AWG) in the usual method: the wire should go around the stone, close to the edge but small enough that you won’t see it when you look from above.

After soldering the base wire closed, I placed it over plasticine and secured the prongs around it, evenly. Plasticine helps to keep everything in place while you work. I use the oil based plasticine that doesn’t dry (unlike play-doh). 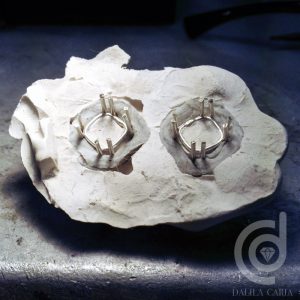 I placed a roll of plasticine around all the prongs, where they touch the base wire. That was the area I wanted to solder, so I needed it to remain clear. I poured plaster on top of the setting and allowed it to dry. The plaster keeps everything in place as you solder, so the prongs won’t move. It’s a great help for precise construction. This piece required plaster several times to stabilise all the different elements and allow me to solder them without stress. 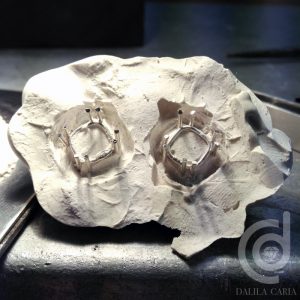 Once the plaster was dry, I removed the plasticine and was left with enough room to solde thee prongs. 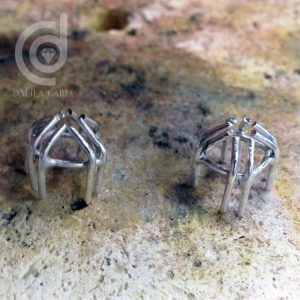 When the prongs were secured, I cut off the excess wire and soldered a smaller wire ring at the bottom of the setting, to protect the lower tip of the stone. This completed the setting. 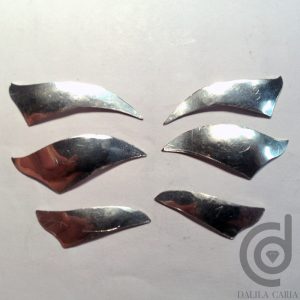 I cut several triangular shapes out of o,5 mm sheet metal to shape the body of the earrings. I used a doming set to give a subtle curve to the metal. If you look closely you’ll see each element has a number scratched on the surface so I wouldn’t mess up the order in which they were to be assembled later on. I use a sewing needle attached to a pin vice to make these marks. It works like a pencil. 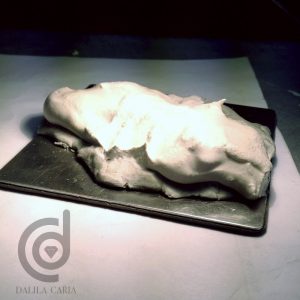 Once again I assembled the 3 plates that make up each earring over the plasticine and covered them with plaster. 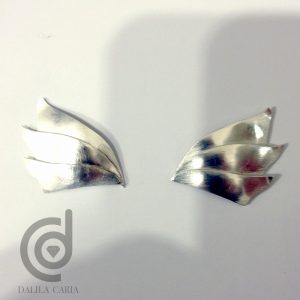 I soldered the tip of the three plates. The rest was loose so I could make different levels. One of the main concerns when making jewellery is that the piece must have volume. A flat piece is boring so we always try to create different levels. 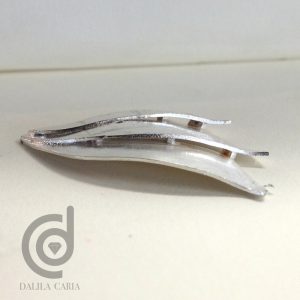 After soldering the tips I cut several bits of square wire to make pillars that would support the opposite end of the plates, to stabilise the height. 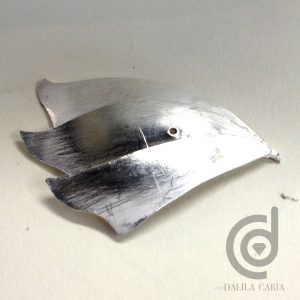 To insert the stone setting I had to cut off a square section. I made a small hole with the drill and inserted my jeweller’s saw to cut the rest. 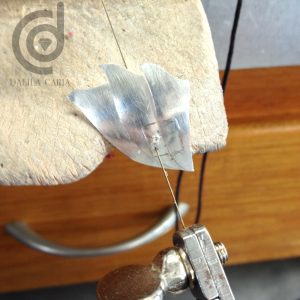 I always cut a bit smaller than what I’m going to need and file away the rest. Since the fit needs to be tight, if you cut the hole too wide there will be no contact between the setting and the sheet metal around it, making it impossible to solder. 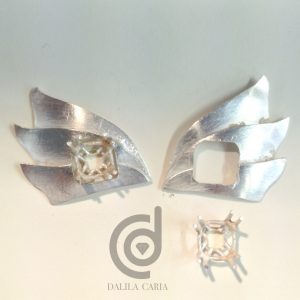 Filing this square until the setting fit perfectly was extremely time consuming but it’s important to have a good fit so I had to keep checking the fit to make sure I wasn’t taking off too much metal. 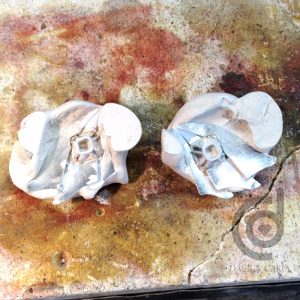 I covered everything in plaster once again to solder the settings to the earrings.

When soldering a new part it’s important to cover previously soldered joints with liquid paper white out. It gets the metal dirty so it protects it from melting and keeps the solder from flowing again. It’s also important to aim the heat at the largest part you’re soldering, in this case the sheet metal. The wire in the setting heats up faster and may melt if you point the flame directly at it. 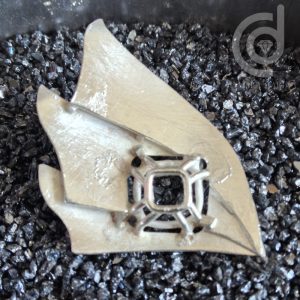 There was the occasional spot where the prong didn’t touch the metal (even after being so careful) so I had to add a “bridge” made from a bit of wire that was later filed away until it looked like it was part of the prong. Due to the curve in the metal I couldn’t use a regular file in that spot, so I used a diamond burr with my flex-shaft. 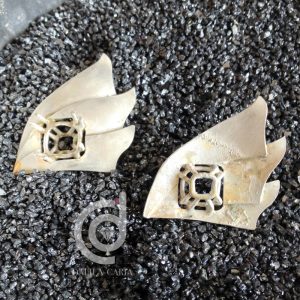 After the settings were soldered in place it was time to make the walls. This is another process that gives dimension to a piece. In this case it was only a partial wall that tapered from the tip towards the wider part of the earring. 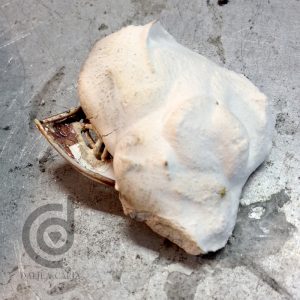 I shaped and filed a strip of rectangular wire to fit perfectly against the shape of the earring and covered it with plaster but left the tip uncovered so I could solder. Once that first solder held everything in place I could remove the plaster and add more solder to the rest of the walls. I was careful to cover the soldered tip in liquid paper white out to prevent the solder fro running in that area, which would have made the walls move or collapse. 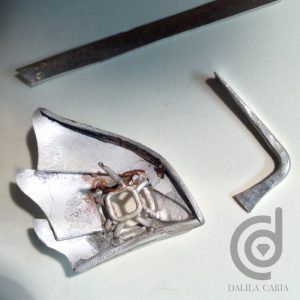 Once the main part of the earrings was done, it was time to focus on the post and leverback construction. I soldered the post to the back of the setting, parallel to the prongs. I then made an 18mm square wire, using the rolling mill. I folded it in an L shape and hammered the end flat – one side vertically and the other horizontally. 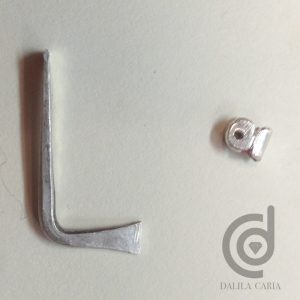 On the picture above you can see both elements that will make the hinge for the leverback. I had to make a hole at both flat ends of the L shape. On one side will be the hinge and on the other there’s and opening for the post.

The hinge base has to be rounded so it will rotate. By placing the latch in place it’s easier to mark the spot for the holes.

The tip of the post also needs to be hammered flat and a small triangular notch need to be cut. This will allow the post to lock in place when closing. Measurements need to be precise so it will click closed, preventing it from opening accidentally.

The main problem I have with this kind of post is that the notch in the post can hurt your ear when you put it on. 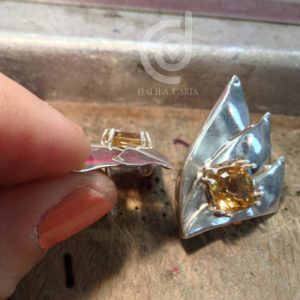 Before securing the leverback I set the stone and polished the earrings. Check out my older tutorials for further details on the setting and polishing stages. 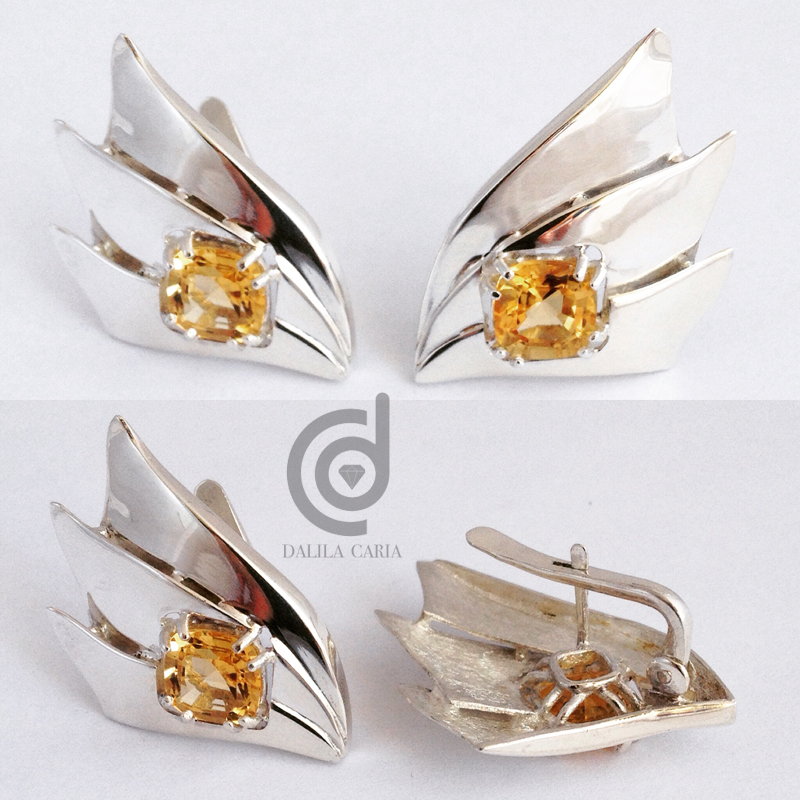 Finally I inserted a piece of wire in the hinge and squeezed it with pliers to form a rivet. The earrings were done. 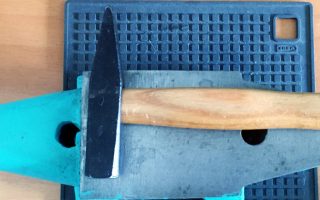 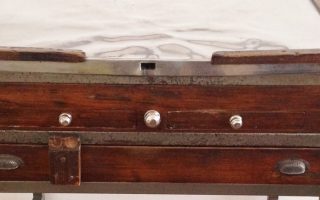